WGEF’s response to the insurrection at the U.S. Capitol on January 6th, 2021

On January 6th, a violent insurrection aimed at stopping Joe Biden from becoming the next duly elected president shocked the world. America has a long and vibrant history of a peaceful transition of power, even during times of contention. It is this transition that keeps the American Experiment alive and moving forward. While the U.S. is not exceptional, it is the aspirational nature of our constitution and a majority of our citizenry to continue to create a more perfect and equal union.

WGEF condemns the violent event, the destruction, the death, and the surreal scenes that caused many to usher their children from the room; the chanting and costumes that blurred the line between reality and the impossible; and the utter desecration of America’s preeminent symbol of democracy.

On full display January 6th was the ultimate in white privilege, flaunted in an orchestrated, armed, white insurrection at the Capitol. The disparity with which white and black people are treated in similar (only in size and space) scenarios was in full view.

This disparity in police treatment of the Trump lead mob and BLM protestors—as well as other protestors advocating for civil liberties and equal justice—is blatant. The deep and entrenched racism that continues to plague this country was encouraged and perpetuated from the top down, and as an organization committed to social justice, we strongly condemn, and not politely, what is black and white.

While protesting after the murder of George Floyd and Breonna Taylor, BLM activists and others were met with tear gas, flash grenades, and rubber bullets, with many sustaining serious injuries. Compare that to the gentle and polite treatment of the white insurrectionists by some law enforcement officers, and the lack of serious preparation by many. The hypocrisy is mind-blowing.

Our hope is that we take this moment to engage and begin to build the future we want; to hold our government officials accountable and speak truth to power; and finally, to do the hard work of healing and creating a world based on racial, economic, and gender justice.

WGEF works every day to promote social justice. In everything we do, justice and equality are at the heart of our work. 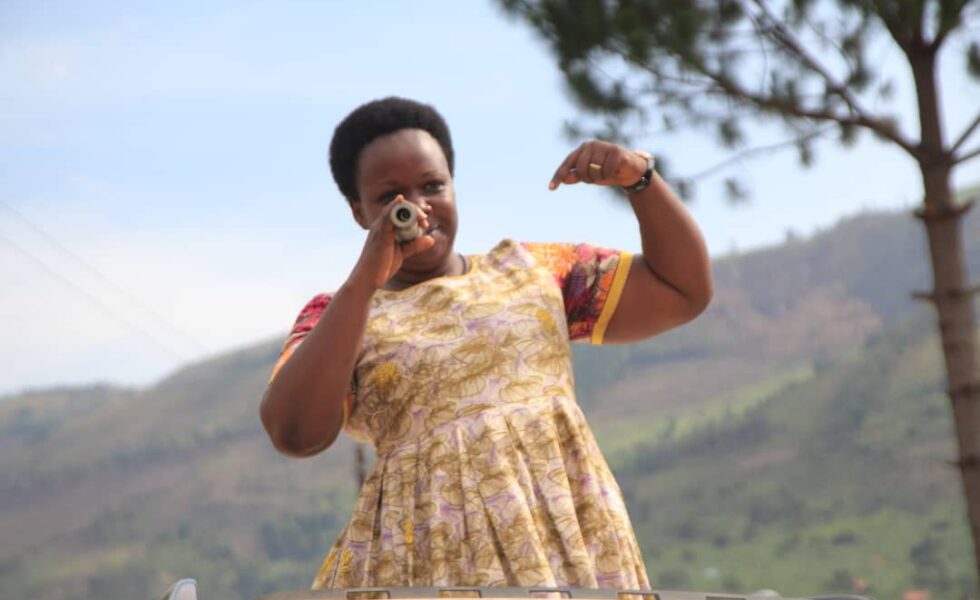 As the general elections take place on 14th January 2021, 25 women from WGEF’s Leadership Development Initiative are running for office! Participating and creating change at all levels in their communities is key to advancing gender equality.

“The day my friend Night 32 years old and mother 2 children died while giving birth in a health center being attended to by doctors and nurses who had to stand by and just look by because they facility lacked medical equipment and drugs. Because the only health center did not have blood my friend and neighbor died like many other women do in Uganda on average 16 women die every day while giving birth and the cause of death can be addressed who can do it’s me and women when they join the mainstream leadership that can influence and cause change” …says Jane

Though Uganda’s legal framework on political competition does not discriminate against women, and have policies that encourage women to participate, the social, economic and cultural construct of Uganda’s society unfortunately creates obstacles to women’s participation in politics.

Thru ongoing, relevant and comprehensive leadership development trainings, WGEF has been instrumental at creating a path for all women to engage and participate in policy development and government at all levels. We believe when women lead, families, communities and nations win! Join our leadership revolution!

“Their Future as Career Women Is Our Hope” 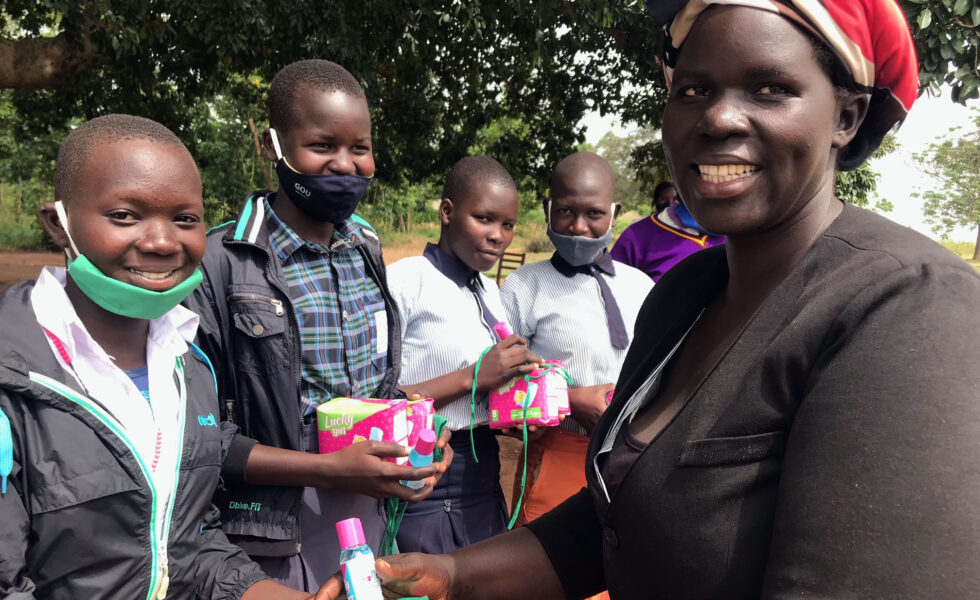 Aber, 34, is a senior woman teacher at Olwiyo primary school in Nwoya District. Her major role is to mentor and support young girls. Below is her story of courage:

“I will not forget this year 2020 in my life, the effects of the pandemic have robbed the future of many young girls. 8 girls have dropped out of school all of them are pregnant and 3 girls were forced to get married. When we open for candidates’ classes in October 2020. The number had drastically dropped from 42 to 29 girls this is sad and unacceptable we must do all what is possible to keep children at school it is the safest way to securing their future”

We are grateful as a school to be selected to benefit from the The Healthy Period Initiative. The timely response to engage girls and boys, parents, teachers and the community on menstrual health and hygiene. The constant supply of lucky girl sanitary pads to all girls before and during COVID-19 pandemic has resulted into girls not missing classes during their periods, their grades have improved and their self-esteem is boosted.

As a senior woman, all girls are my daughters. I want to see every girl join, stay safe, finish school and become career women in future. My school received 800 packs of sanitary pads from WGEF during COVID-19 lock down, with is support we were able two follow up our students and support them with pads a long side information on how to stay safe and avoid corona virus.

We should not give a chance to the disruptions of COVID-19 to destroy the future of children. Lastly, I thank WGEF for a well thought program that influences positive change in our community. “I take my self to be a lucky senior woman teacher as my lucky girls are because we are part of the Healthy Period Initiative”.

I Was on the Verge of Giving up on Life 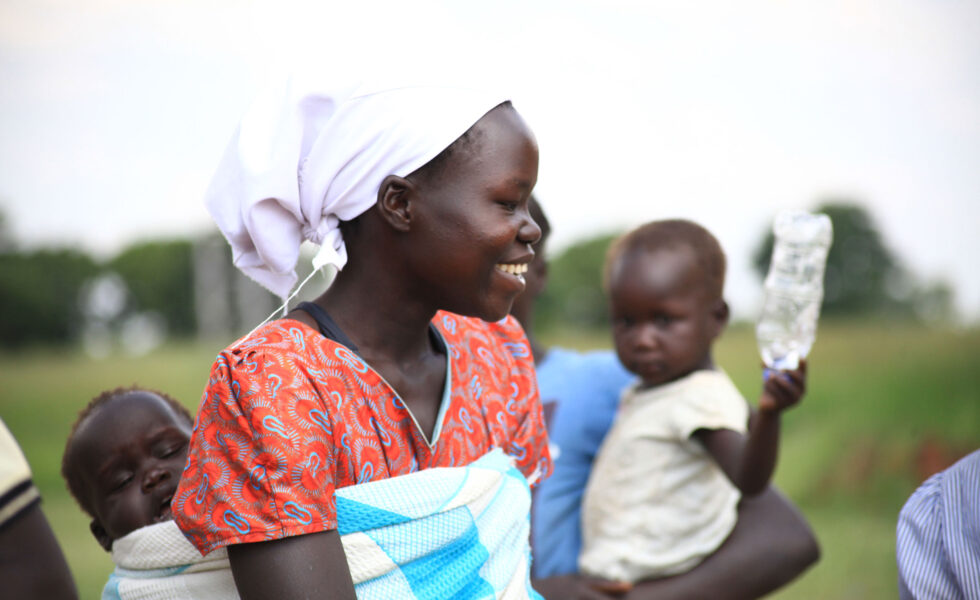 In her own words, interviewed by Bukenya Muusa, WGEF Program Director

Moreen aged 39, is a widow with three children and seven other dependents; all are refugees from Democratic Republic of Congo. Moreen, with other five members, formed a business group. She says WGEF came at a time she needed a hand to hold her from collapsing. “I had a timber business in Democratic Republic of Congo, when I lost all I had to the soldiers. I was on the verge of giving up on life as I had completely nothing.

A friend invited her to a WGEF training; a number of facilitators spoke and gave them hope, encouraging them to look at things from a positive angle. The facilitators told the story of a Bumble Bee that manages to fly even when many people thought it had no ability to fly. This motivated Moreen. During the training she learned about Enterprise Selection and Projected Income Statement that enabled her identify the business opportunity of growing and selling coffee.

After the training, she requests for an agro loan of $320 from WGEF and used it to buy coffee for selling; and used the balance to hire and prepare land for growing beans and maize and $217 for paying school fees. After harvesting, she raised $800 from two tons of beans and one ton of maize and also continued buying and selling coffee.

She has since diversified into a big supplier of produce linking the buyers from Gulu in Uganda with those in neighboring DRC who need all most food. Since 2016, she has been consistently working in this field and her daily sales approximate $81 per day. Her businesses are now is worth over $1500 (usd).

Moreen currently employs 4 workers. She has a daughter at Kyambogo University where she pays tuition of $400 per semester and another child in A-level. She is now very influential in her group and community as a whole.

“I encourage fellow women to stop over-depending on their husbands, they should start their own businesses with whichever money they have to have sustainable income in case their husbands are no longer there”.

Moreen thanks WGEF for putting a smile on her face once again.

After Succeeding in Business, I Now Have a Voice in My Family 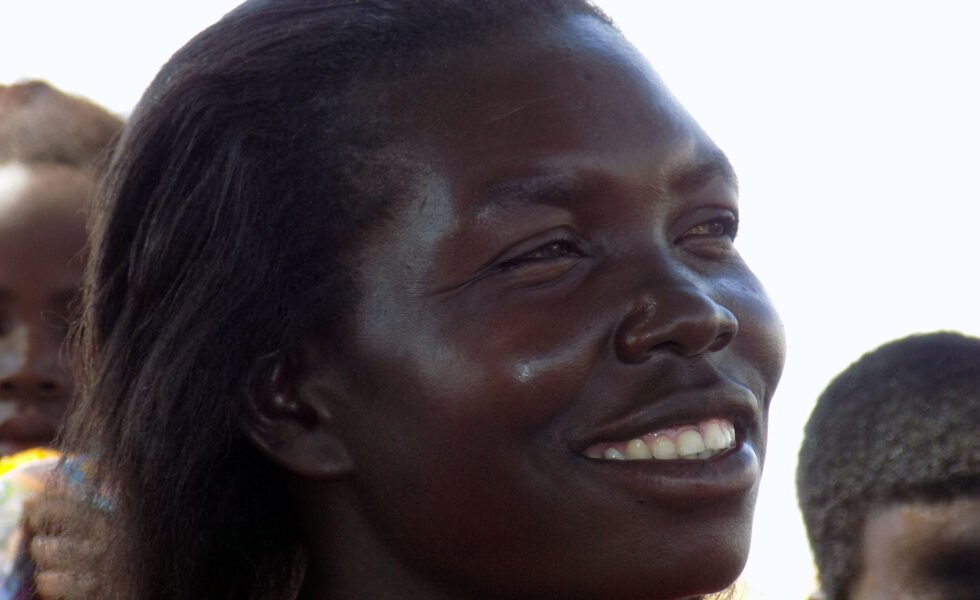 In her own words, interviewed by Bukenya Muusa, WGEF Program Director:

“Before attending WGEF’s business skills training,” she says, “I was not doing any business but was depending on my husband for everything. I would endure all harsh words from my husband in order to survive. We briefly separated because I could not sustain the stress in our marriage.”

While staying with her sister home, she visited with the district chairperson who came to inform them about a business-related training organized by Women’s Global Empowerment Fund. She got interested and confirmed her participation. In that training, she learnt three critical issues that have enabled her to start and grow her business: diversification of business, how people have the same brain, ability, and how to save and invest.

After the training, she sold her goat for $29 and cultivated one acre of maize while at the same time brewing local ginger beer to support her farming activity. Mary has increased her savings with her group and used part of the savings to buy five goats valued at $32 each and has since multiplied them to 8 goats.

Mary’s capital has increased from $29 to $490; from farming, she raises an average of $217 per season and monthly sales of $21 from handmade ornaments.

“My husband came back and begged for forgiveness because he saw the progress in me and the family as we were feeding well and dressing properly,” Mary says. “We no longer have fights but rather support each other. We are able to keep our children in school and have started constructing a house.